As mentioned before, this was the novel I wanted to pick up. I randomly bought it in Japan because the cover looked interesting. I’ll be reading and translating it at the same time so I have no idea if it’s good or not.

王女殿下はお怒りのようです (Her Royal Highness seems to be angry) was written by 八ツ橋皓 and illustrated by 凪白みと.  Please do consider supporting them if you like the book by buying it here.  Also, I won’t be posting any illustration beside the cover which is available online (I’ll make it painfully obvious that an illustration supposed to be there though!).

Lastly, I’ve mentioned that I’ll do alternative releases for this and Ben-To. But since this is only a short prologue, next release will be chapter 1 instead. 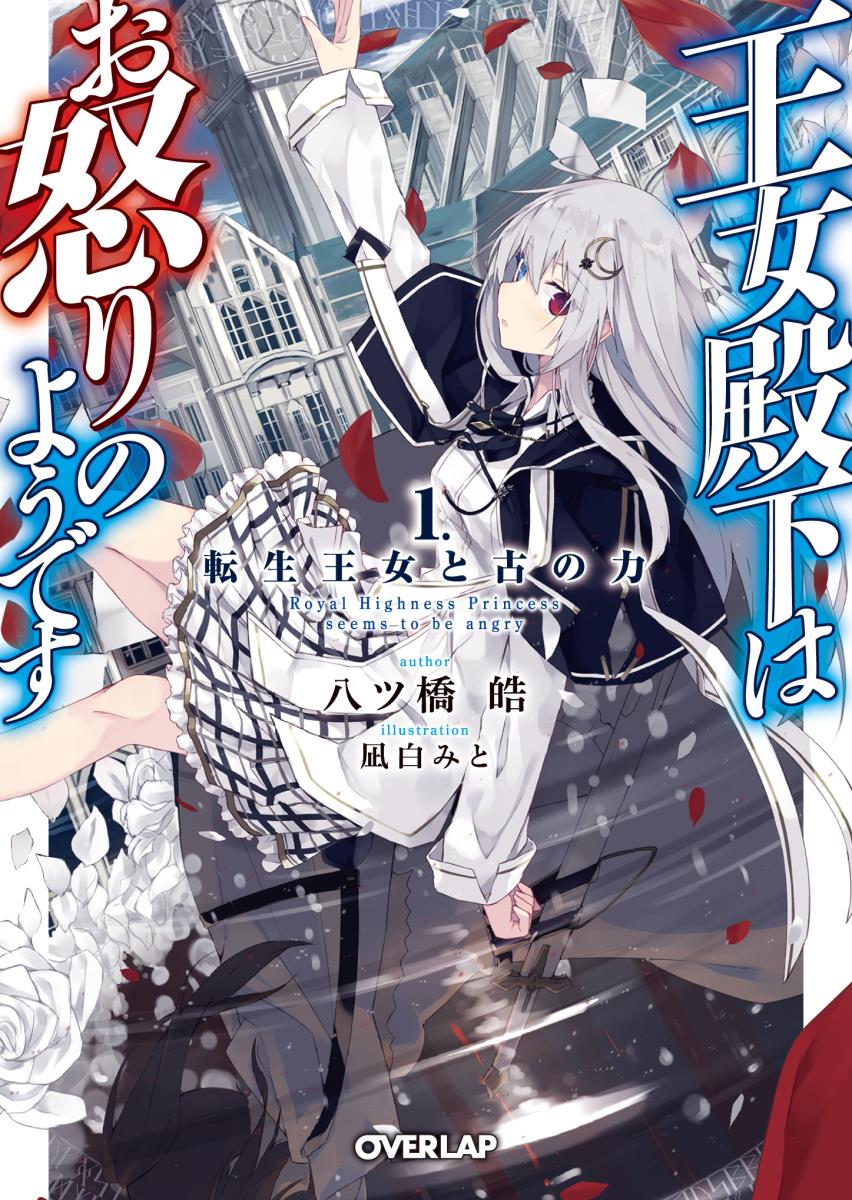 Prologue: The Beginning of the End

Her name was Princess Leticiel.

She was born in an age of chaos, where countries waged bloody wars against each other, while vying for continental unification.

It was a barbaric world. A world where everyone, young and old, had to pick up their weapons and wage war in order to survive.

And Leticiel was the princess of a remote kingdom.

In this age, the concept of true peace did not exist. And yet, in that kingdom located far away from the war-torn barren lands in the middle of the continent, something that could be called peace existed.

Even though disputes with neighboring kingdoms never stopped, and the kingdom often had to wage war, its situation was not desperate to the point of enlisting its entire population for war. Leticiel was living a gentle life, surrounded by a loving family. She got along well with her other half as the pair protected the citizens they loved.

In a world where anyone wishing for peace would be laughed at, even a fraction of Leticiel’s daily life was more than enough happiness.

However, even that would still end today.

The kingdom was invaded by a neighboring major power. Citizens were massacred, streets were set ablaze, countless lives were lost.

Anyone with an ounce of strength fought back with all they had, but it was a drop in the ocean compared to the enemy’s might. The kingdom was engulfed in the blink of an eye and became something that would be more fitting to call, hell.

Even the royal castle, which had been impenetrable, was now under the neighboring kingdom’s control due to the efforts of its sleeper agents.

The throne room was covered in blood. There were even traces of a sword fight carved deeply into the wall. Viscera and body parts left dangling here and there.  Anyone who laid eyes on this scene would agree that there had been an obviously gruesome fight.

Heat hazes were shimmering in the air outside of the windows, which were violently embraced by the pitch-black smoke that shrouded the overcast sky. It wouldn’t have taken anyone much time to realize the castle had been set on fire.

Even though the man bathed in crimson was approaching her with a blood-smeared blade, Leticiel looked at him blankly, as if it was none of her business.

Around that man’s feet were countless bodies lying on the ground. The King, the Queen, as well as Leticiel’s beloved significant other. Everyone, everyone had been killed by the invading enemy.

In this moment, the only surviving royalty in this kingdom was Leticiel.  The fact that that man had arrived here spelled the end of the kingdom.

“I need to resist him,” she thought. Leticiel was a mage that could have been said to be the kingdom’s greatest treasure.

However, she didn’t act upon it. No matter how strong Leticiel was, the enemy would match that might with numbers. And because of her strength, her entire family was killed.

The royal capital had fallen, the royal castle had been lost, the entire kingdom was filled with the enemy’s forces. In such a hopeless situation, there was no point in resisting alone.

Leticiel had already given up on everything.

Her beloved country, the kingdom she once knew had already disappeared. The once-lush green fields had turned into scorched earth, the beautiful townscape had been mangled beyond recognition.

The citizens she once loved so dearly had now turned into lifeless corpses. Her beloved family and the person to whom she had made an eternal vow had departed before her.

There was not a single thing Leticiel wanted to protect left in this world.

The only thing in that bottomless pit of despair, was the flame of hatred that wished to consume everything, even if the cost was her very body.

In that case, there was no reason for her to remain in this rotten world.

Leticiel gently smiled at the man standing before her. The man was stunned. It was most likely because her reaction was completely outside of his expectations.

She then gripped the blade of the sword that was in the man’s hand, and slowly turned it towards her own heart. Rather than letting someone else kill her, Leticiel would rather take her own life.

Leticiel didn’t want that man’s circumstances to pour cold water on her plan, after she had finally resolved herself.

She was sure that the neighboring kingdom wanted to capture her alive. Being the kingdom’s greatest mage they would kill to obtain her.

Because of that, they didn’t lay a single hand on Leticiel until the very end. To make an example, her family was killed off one by one through underhanded tricks.

Multiple men were running towards her from the entrance of the throne room. They were likely trying to stop her. Leticiel let out a chuckle.

If the enemy who destroyed her beloved nation wanted to use her, then she had to keep her dignity as the princess until the very end. She would not allow everything to go the neighboring kingdom’s way.

Thanks to the length of the throne room, even though the men had been running toward her, they didn’t make it in time.

Leticiel dropped her head to make small prayer. The men behind her weren’t able to see her face. The only person who managed to witness the final expression of the kingdom’s greatest treasure was the man frozen before her. He was saying something again, however, nothing could reach her ears at this point.

Leticiel smiled gently, as if a weight had been lifted off her shoulders.

It was a beautiful smile.

It was a noble smile.

It was a refreshing smile.

It was a cheerful smile.

Even though she would die soon, Leticiel was feeling strangely excited. After all, she would be able to be with her beloved, and have her revenge on the neighboring kingdom at the same time.

Leticiel wondered where she would end up, heaven or hell. She slowly closed her eyes, and thrusted in the blade.

With the unpleasant noise of metal tearing through flesh, the bloodied sword penetrated Leticiel’s heart. But there was no pain after all. For some reason, the sword went even deeper than she had expected.

It was as if the sword knew it would be piercing this body. And in just a moment, Leticiel was standing before death’s door.

Strength slowly disappeared from her bloodied hand as Leticiel’s body leaned forward. An iron taste filled her mouth; it then flowed out along her cheek, making a stain on the carpet.

That was the end. There was no fear of death inside Leticiel’s heart, it was only filled with relief.

The man with the sword along with the men that came after would face capital punishment. They would be forced to take responsibility for Leticiel’s death, and their heads would certainly roll.

It was collateral damage. Leticiel had acted of her own free will. There was simply nothing the men could have done to stop it.

Strength steadily slipped away from her body as it grew colder and colder. She had lost too much blood; her vision grew hazy and she couldn’t even lift a single finger.

While gazing at the scene of those from the neighboring kingdom trying their best to treat her, Leticiel’s consciousness rapidly faded.

(…I wish my next life is more comfortable…)

Just before her mind slipped away, Leticiel voiced a nonsensical whim to herself.